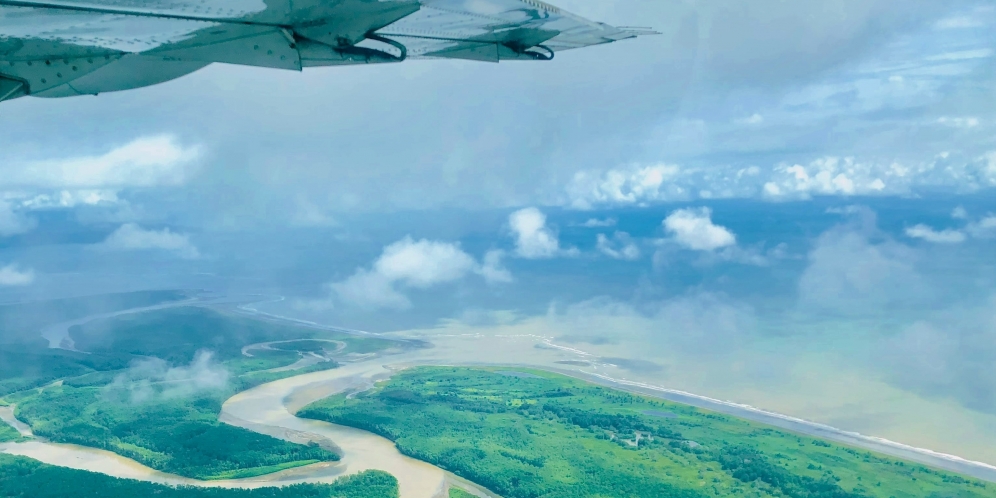 The air transport industry serves as an essential sector of the economy due to highly efficient and international mobility and logistics chains, which are connecting people and markets around the world. In order to meet the global demand for flying, and climate protection requirements at the same time, a number of future investments are needed to primarily promote sustainable air transport. Funding for technology, operations, and infrastructure, as well as the use of sustainable alternative fuels and the development of new types of aircraft can help reduce CO2 emissions in the long term.

In this regard, ‘Sustainable Aviation Fuel’ (SAF) plays a particularly important role as it has the same properties as fossil kerosene but emits around 80% less CO2. A major advantage of SAF is that aircraft engines do not necessarily need to be modified for its use. However, SAF is not yet competitive because it is not yet produced in sufficient quantities. With the ‘Power-to-Liquid’ (PtL) process, fuels can be produced using renewable energies. Nevertheless, this process is still associated with very high production costs at this time. In order to reduce the costs of these alternative fuels to a competitive level, an expansion of commercial production is imperative, but this can only be achieved with political support.

In June 2021, the EU Commission developed a proposal that provides for a gradually increasing blending quota of SAF as well as a special sub-quota of PtL fuels. BARIG welcomes the EU Commission’s clear commitment to alternative fuels. Now, the task will be to provide high-level support for the market ramp-up and to avoid possible competitive distortions between the aviation markets. Currently, with the introduction of the mandatory blending quota from 2025 onwards, a European airline would, for example, have to refuel with more expensive SAF for all three flight segments on the connection Hamburg via EU-hub to Bangkok, while a non-European airline on the connection Hamburg via third-country-hub to Bangkok would only incur additional costs on the usually shorter feeder flight. Therefore, the additional costs incurred by refueling SAF must be compensated in every respect in order not to disfavor European airlines in this context.

Next to these competitive distortions, political climate protection measures that are geographically restricted lead to further undesirable side effects. It can be assumed that airlines which have the option to refuel their aircraft in third countries will take on more kerosene there than actually needed for a single flight. Thereby, they can circumvent the significantly higher kerosene costs within the EU. This procedure is also known as ‘tankering.’ Due to the aircraft’s higher weight, CO2 emissions would be increased rather than reduced. For that reason, additional costs of SAF must be reduced significantly at a political level in order to prevent such undesirable side effects.

Currently, the transportation sector is also witnessing an increasing use of the hydrogen strategy in addition to SAF. In aviation, hydrogen shall be used as an alternative propulsive power from 2030 at the latest. The technology is already being tested in small aircraft prototypes. However, the tanks of existing aircraft, for example, cannot be used for hydrogen energy. Additionally, the infrastructure at airports must be extensively adapted for these fuels.

Electric flying is also holding new opportunities for future air transport, nevertheless, it is only in the early stages of research as an energy alternative due to various weight and storage-specific challenges. Prospectively, electric flight technology is said to reduce CO2 emissions as well as noise pollution greatly. First of all, the focus will be on hybrid-electric aircraft that can fly short distances in regional areas using battery powered propulsion.

While these technologies have yet to be developed further, alternative fuels can already be used today with the existing aircraft technology and infrastructure at airports. Experts believe that, to start with, electric and hydrogen powered aircraft could become a reality for short-haul and medium-haul flights. Long-haul flights, on the other hand, will continue to be dependent on liquid fuels much longer due to high energy requirements. Considering the aspects mentioned above, it becomes even more important and urgent that political authorities provide strong support for the introduction of SAF into the market, since this climate-friendly alternative is already available to us today and can effectively contribute to CO2 reduction within a relatively short period of time.